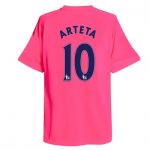 Sky Sports News claim that Arsenal sources are saying that the deal to take Mikel Arteta to The Emirates has been completed.

The Spaniard joined Everton in 2005 and has scored 33 goals in just over 200 appearances for the Blues, creating over 40 goals along the way.

An initial offer of a player plus cash was rejected by Everton, who then allowed the player permission to talk to the Gunners after another offer of cash only reached the club.

Arteta will leave Evertonians with many memories, most notably his special goals against Fiorentina, Bolton and his first in an Everton shirt, against Crystal Palace.