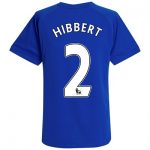 Hibbert has recently returned from the groin injury that forced him to sit out Everton’s hectic Christmas schedule, and he was included in the 18 man squad that drew 1-1 with Blackburn last Saturday. However, despite having Heitinga and Duffy to call on for the FA Cup clash against Fulham tomorrow, Moyes stated that he is considering partnering Hibbert with Heitinga at the heart of the Toffees’ defence.

Moyes said: “Sylvain and Jagielka are both progressing well but won’t be available for this game.

“So far Shane has done really well in the games and it is terrific for the boy. He has got something and he has a chance. He will certainly make a really good career in the game and we hope it is at Everton.

“The level is going to step up shortly and the more you play, the more people expect from you. In your first couple of games as a youngster people do not expect too much.

“When you stay in the team then the supporters’ and the manager’s eye gets drawn to you. We want him to keep doing things simple and not over-complicate things, and if he keeps playing as well as he has done in the last two games then we will all be happy.

“The decision for me is that I will have Tony Hibbert fit and available, so do I put him in because of his experience, albeit not being a centre half? So we have got that in our mind as well because the games now are really important games.

“We have got to win in the cup to get through and we have games coming up that are against really top teams. We have to decide if Shane is the right one for the job.”

Everton host Leeds United on Saturday aiming to keep themselves in touch with the leading teams in the Premier League.

Put Everton’s safe standing at the back at Bramley Moore

I think that the safe standing should be at the back third of the new South Stand at Bramley Moore, not at...

The 2020/21 Premier League campaign is well underway and Everton could be ready to take advantage of what promises to be one...

After breaking through at Sunderland, Jordan Pickford looked as if he was going to become English football’s next top goalkeeper. At the...

Moyes: No extra rest for Olympic participants
Moyes: Blame me not Bill
To Top