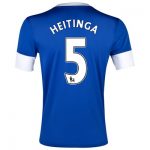 John Heitinga seems to be the topic of discussion in the media of late, with a move to Fenerbache mooted this week.

However, the Dutch defender has two years left on his contract at Everton – having signed a five year deal in 2009 – and said earlier this month that he has no intentions of leaving Goodison Park.

While acting as co-commentator on EvertonTV for the game at Dundee United, Heitinga insisted “I’m going nowhere.”

A £5m move to the Turkish club is dominating headlines across the web, but when less than a week ago the player himself was declaring his love of Everton, it’s hard to see it coming to fruition, especially when the same club won’t pay £4m for Joseph Yobo.

Heitinga added, “It’s a real family club and I love it here.”