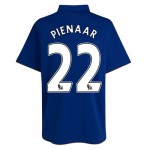 Steven Pienaar is at Finch Farm undergoing his medical, we can reveal.

The South African arrived at Everton’s training complex this morning and could sign for the Blues as early as this afternoon, should everything go well.

After weeks of speculation and false starts, it looks as though the midfielder who spent the second half of last season at Goodison Park will finally become an Everton player for a second permanent spell at the club.

We expect Everton Football Club to make an announcement at some point in the next day or so, and hope that Pienaar will be a welcome addition to the squad.