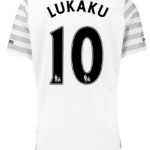 Romelu Lukaku claims that helping the team win matches is the primary objective in his mind – despite breaking more records for Everton at the weekend.

The Belgian was a doubt ahead of Saturday’s 3-0 victory over Stoke City, but confidently dispatched a penalty on 11 minutes to send the Toffees on their way.

It was the 16th league strike of Lukaku’s season, and ensured that he equalled the record set by Tony Cottee and Andrei Kanchelskis for the Blues back in the 90s.

And, by taking his total tally of goals for the campaign to 20, the 22 year old became the first player since Graeme Sharp to reach that target in back-to-back seasons.

“I’ve very happy to achieve personal records for this Club,” Lukaku reflected after the win at the Britannia.

“If you look at the history and the great strikers that we’ve had, it’s always nice to be in those books as well. I just want to improve and, at the end, I just want to lift [silverware] like we all want to do.

“I was a bit hesitant in training [on Friday] but I just went out there and went through the pain.

“I’ve done it several times in my Everton career – it’s not the first time – but even at 80 per cent I was able to help my teammates; not the way I wanted to, but I did my fair share of the hard work, like everybody does in this team, and I’m happy to have scored as well.