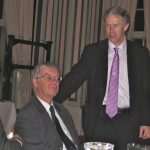 Sir, either support Bill Kenwright and David Moyes with investment or buy out and replace Bill Kenwright, Jon Woods and Robert Earl or sell your shares to someone who will help and bugger off.

Sir, we beg you NOW is the time to get off the fence before we become relegation candidates. Again, in the words of that other rich Evertonian: Help!

Way back in 2002, Philip McNulty then with the Echo now with the BBC, asked the question: What is a Lord Grantchester?

His article is repeated below:

What is a Lord Grantcheter? It was a cruel question – but a fair one that was never properly answered.

Namely, when it comes to Everton, what is a Lord Grantchester and what is it for? Lord Grantchester, for those who understandably forget, was the toff from the Moores family who occupied a space in Everton’s boardroom for several seasons or derring-do – or in his case derring-don’t. And as a final solution to that burning question, that was about it really.

This was the same Lord Grantchester who asked a journalist who lived in Aigburth had he done much farming recently. This was the same Lord Grantchester who, when I rang him at his country “seat” to inquire whether he would care to comment on suggestions that Howard Kendall had been sacked but was being dangled on a string until it was announced officially, told me the car had started, his wellies were on, and he had to dash. As denials go from this undoubted man of the people, it was down there with the worst.

That was Everton’s cash-strapped past. This is Everton’s cash-strapped present and a slightly different version of the question begs to be asked. What is a Paul Gregg and what is it for? Gregg is named in many a rich-list as reportedly having a personal fortune of well in excess of pounds 100million – and is presumably  SFX’s man in the Everton boardroom for when they attempt to lure Madonna and that bloke off Pop Idol to King’s Dock. But what use is a Paul Gregg when manager David Moyes  is clearly being forced to operate in the fag-end of the transfer market and Everton’s supposed re-financing appears to be yet another case of jam tomorrow?

Has Gregg got any affection for Everton Football Club? Has he any idea that more than a few supporters are now questioning why the club has such a wealthy chap in the boardroom and yet Moyes has a supposed pounds 5m to lavish on his transfer targets? What will he do if the King’s Dock development sinks into the Mersey? What will he bring to the party then? Gregg may have poured countless millions into the club for all I know – and if he has I offer humble apologies in advance. But no-one knows because he remains a mysterious and enigmatic figure. He will not remain so for much longer when Everton fans see Manchester City lavishing money in the transfer market and pursuing a pounds 12million deal for Nicolas Anelka Nicolas Anelka.

What have Manchester City got that Everton haven’t? How can they do this when Everton, a club of much greater longevity in the supposedly cash-rich world of the Premiership, continue to plead poverty? No. I don’t understand it either. One sensible voice suggested Gregg could offer Everton a “loan” to speculate on players, with a guarantee of getting his money back and more, especially if a profit was made. Sounds fair enough to me.

Power within the Everton boardroom does not simply mean a responsibility to build a new ground, it means improving the football team. Gregg is no exception.

A lot has happened since McNulty’s article wrote his words in 2002. Nothing has happened in the past 8 years except Lord Grantchester and Man City have got richer, and Paul Gregg can be replaced in the above article by Robert Earl. Possibly he is waiting for an expression of our support.

Sir, you are our future. Sir, your grandfather, the billionaire John Moores, would not have hesitated to put his hand in his pocket to help his beloved club. Please Help! I need I need somebody, Help not just anybody, Help! I know I need someone, Help!

I dream that Lord Grantchester will replace the existing board of directors in the summer and reduce our debts and provide the necessary readies to keep David Moyes at Everton. Therefore I propose that we email him, call him, stop him outside Goodison and let him know that we are behind him.

Sir, the revolution is coming and we will get behind you when you implement your coup d’état. Sir, please help. The people are behind you! Does anyone know how to contact him at the House of Lords to let him know that we are behind him. Long live Lord Grantchester.

How much influence did Phillip Green have on Pienaar sale?
Billy looking to take chances
To Top