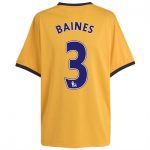 This is going to be the story that refuses to go away this summer, that Manchester City are on the verge of offering more than £20m for Leighton Baines.

With stories similar to those two years ago surrounding Joleon Lescott, the media simply won’t let this bone go and today’s stories claim City are prepared to offer £20m in cash as well as Wayne Bridge for the England international.

This would, in theory at least, give Everton a direct replacement and money to spend, but Everton boss David Moyes will be reluctant to do any business with City after their behaviour in signing Lescott.

Baines shone for England yesterday, getting an assist for England’s equaliser after a clever run and an intelligent lay off, and the summer has a long way to go before the rumours die down.