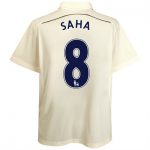 French striker Louis Saha says he could sense the passion and history at Everton in the moment he signed for the Blues.

In his book, “Thinking Inside the Box” the Spurs forward says, “The moment I arrived at Everton in 2008, I felt the boundless passion and enthusiasm for the club from everyone there.

“The respect for the club’s history, its culture and values must be expressed by each player on the pitch.

“Jimmy, the masseur, has the Everton crest tattooed on his calf.  The motto reads: Nil Satis Nisi Optimum (Nothing but the best is Good Enough)

“Their greatest player was Dixie Dean, top scorer of the 1920’s.

“Goodison is a special stadium which has hosted a great number of top flight matches.  You can feel the spirit of many great sportsmen when you go on the pitch.

“It’s a healthy club and I always felt the players were ambitious and wanted to improve.  Its foundations are based on group effort as opposed to individuals.  The team shows fighting spirit.

“Everton is an honest place and the people are straight with you.”

Saha includes a lot of comment both about and from his Everton team-mates in the book, and reserves special praise for Phil Neville, who he describes as a “great guy, great player, and top professional.”

Saha’s “Thinking Inside The Box” is available from all good book shops as well as online at Amazon.