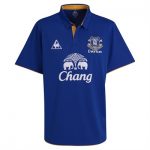 What constitutes success in the modern game, and, more relevant a question to us as Blues, what do we class as a successful season for Everton, asks Richard Price.

Would those Evertonians that believe we have had a good season be less satisfied with seventh if Liverpool had finished higher up the table? Would they be as happy with our final league placing if we had not earned a trip to Wembley in the FA Cup? What if we had started off the season brilliantly but fell away badly at the end – would going into a summer break off the back of a poor run of form feel somehow worse, even if we had still ended up in the same league position?

By my reckoning we had an okay season. The poor start thing is definitely getting tiresome though. Every year we suffer the same terrible early form, and always a different excuse. I suppose it is to the team’s credit that they always seem to manage to turn things around after Christmas, but if this is the real Everton, it only makes early season Everton that bit more perplexing.

In the January transfer window, for the first time that I can recall, the squad was strengthened considerably with the return on loan of Stephen Pienaar, and the signings of Darron Gibson and Nikica Jelevic. One wonders whether the team could possibly have mustered its customary post-Yuletide surge without these fresh arrivals to give new impetus and add undoubted quality to a side going nowhere and struggling desperately for goals. I suspect not, although we shall, of course, never know for sure.

Finishing above Liverpool was more of an achievement than any of the media gave us credit for (hardly a surprise there). I do not say this simply because they are our dear neighbours from across the park, but because it was only the second time we have managed to end the season looking down on them since we last won the league in 1987. Simply economics is the reason why Everton finishing up as the city’s top dogs has been such a rarity over the past quarter century. We can usually give them a tough game or two, but over the course of thirty-eight, they will invariably triumph. Ironically, this season, we barely gave Liverpool a game at all, and yet we still ended up four points better-off than them, even though they took six off us in the Premier League.

In the eyes of many an Evertonian, one game defined our 2011/12 season – the FA Cup semi-final against Liverpool at Wembley. This was our big chance – we were on a roll and they were playing badly, and many dared to believe they were there for the taking. More than thirty-two thousand Blues turned up in the capital on that mid-April morning, but sadly, their team did not. Seeing Liverpool lose the final against Chelsea did not in any way assuage my disappointment for the semi-final defeat, and in a funny way, watching Everton continue with their decent league form whilst Liverpool’s season crumbled, brought home just what an opportunity had been wasted.

The powers that be at Liverpool obviously do not feel that their club have had a successful season, as they have just sacked their manager, Kenny Dalglish. This is a prime example of how differently success is measured in the modern game. David Moyes would probably be knighted if we won the Carling Cup and reached the FA Cup final in the same season, and I am sure virtually every Everton supporter would swap our season for Liverpool’s.

Meanwhile, Arsenal’s wait for a trophy goes on, but I cannot imagine many Gooners would jump chance to swap their 2011/12 with Liverpool. A more difficult question for them would be if they exchange their third place in the Premier League for Chelsea’s FA Cup win and an appearance Champions League final. Conversely, would Chelsea swap their season for Arsenal’s? I doubt it – it surely has to more important to be in a position to actually win a competition than whether or not you are in that competition next season. Not if you are Harry Redknapp and Spurs though – I recall him dismissing Tottenham’s chances of progressing to the latter stages of the Champions League in 2010/ 11, and implied that it was more important that they qualify for the competition the following year, which of course they failed to do (although they did progress much further in the competition than anyone expected – clearly the players’ priorities were different to the club’s).

To conclude, here is a list of all those clubs that either finished above Everton or won a trophy during 2011/12, in the order of whose season I would rather swap with (and whether or not I would swap with them!):