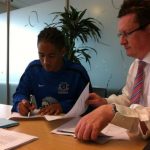 Steven Pienaar has completed his permanent move back to Everton.

As seen in the accompanying photograph, published by the Strictly Gentlemen twitter feed, the 30 year old is shown signing the relevant papers at Finch Farm to complete his move back to Merseyside.

Pienaar left the Toffees for Tottenham in January 2011 but struggled for fitness and form during his time in London, and returned on loan to the Blues for the second half of the campaign last season, scoring four goals in fifteen appearances as he aided David Moyes’ men in finishing seventh in the Premier League.