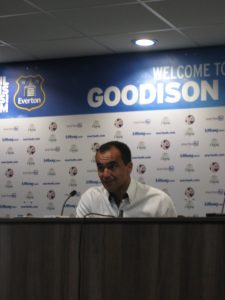 Everton boss Roberto Martinez has said that playing Real Betis today was the perfect way to bring an end to pre-season preparations for his squad.

The manager watched his side run out 2-1 winners against a lively Betis side, who finished 7th in La Liga last time around, and said he was impressed with how his team reacted to not being allowed to have it all their own way.

He said, “Football is about finding a way to be competitive and today we saw what we’ve seen time after time before what this dressing room has, which is an incredible competitive edge.

“You could see early on that we tried to play but we couldn’t see the simple pass but I wouldn’t say that physically we were tired but mentally we were lethargic and it was difficult to be ourselves, but at the same time it was incredible in the manner we reacted and we defended with intensity against a side that I really admire.

“We wanted to be tested and in many ways it was a perfect game to finish the pre-season.  To be able to overcome the demands of travelling to America is impressive.

“Today we saw Ross Barkley who showed flashes of the incredible potential that he has.  It was good to see how the team reacts without Marouane Fellaini but if it had been a competitive game he would have played.  It was great to see Kevin Mirallas and how he’s taken to that role and to see Nikica Jelavic back in the goals which are important boxes to tick before going into the season.”

Martinez surprised by youth excellence at Everton
Martinez: Leading Everton out at Goodison was special
To Top