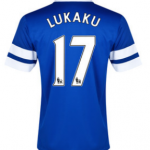 Lukaku has often been likened to the former Chelsea front man, but Distin believes the Belgian has more power and lacks the cheating element of his game that Drogba was famed for.

“He might like Drogba a lot as a player, but I think Rom’s very different,” said Distin. “He’s a lot more powerful. Drogba was a mix of strength and, I have to say, cheating.

“He liked to come strong at you and then when you did it to him he was on the floor. Rom is 100 per cent. If you go shoulder to shoulder with him he’s not going to stop. He’ll just carry on.

“Drogba was canny about when to fall but if Rom can be as good as him in other ways then it’ll be great for him.”