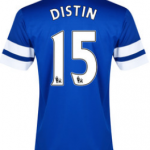 Everton’s Sylvain Distin has provoked a furious response on Twitter to his conversation with a fan at Selhurst Park yesterday after Everton were held to a goalless draw against Crystal Palace.

While it’s not up there with Eric Cantona’s karate kick on a Palace fan, Distin’s assertion that a particularly critical fan should be more supportive of the team has sparked a modern-day war of words on the social network.

The fan in question too exception to being called out in front of other fans, and took to Twitter to accuse Distin of trying to start a fight.  However, photos of the “incident” show that none of the other fans around him were concerned and many were shown giving Distin the thumbs up and applauding the rest of the team.

Many Everton players had a bad day at Selhurst Park, and fans will have gone away less than happy with a point against the bottom side, so perhaps Distin could have avoided a confrontation.  But when you hear the kind of abuse that footballers get week in, week out, then it’s hardly surprising when one of them gets upset when it comes from his own fanbase.

Afterwards, the French defender tweeted, ‘I know my English isn’t perfect but I found it funny how people try to twist my words. And for the record, I was speaking to one single person and he knows who he is as I spoke to him face to face.

‘And then people wonder why players interact with the fans. This is why, Because people twist your word and a simple chat is turned into fight.’