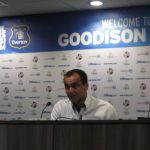 Everton manager Roberto Martinez has voiced his frustration at referee Kevin Friend and his decision-making at Goodison Park today.

Seamus Coleman was felled inside the penalty area in the second half, but got to his feet quickly to carry on the move and wasn’t awarded a penalty, something which has upset Martinez.

“When they tell you decisions level themselves up over the course of a season, it doesn’t happen,” Martinez said. “We had a similar situation at Villa last week and at the Etihad when we were punished with two penalties.

“Seamus gets impeded but he doesn’t overreact and gets back on his feet. That probably allowed the referee not to have to make a decision.

“It was two different halves from our point of view, and in the first half Spurs showed more initiative but in the second half we got into some good positions.

I thought we defended with great concentration throughout because you have to do that against this talented Spurs side.

“I thought we lost the ball too quickly in the first half and that encouraged Spurs to have longer spells of possession but I was pleased that we were able to defend with focus throughout that period.

“The second half was different. We imposed ourselves and we were the ones forcing Spurs to defend. The two teams weren’t happy with the draw – they were both driving forward to get a winning goal.

“Overall I’m glad we showed the character and focus to defend in that manner and keep a clean sheet.”