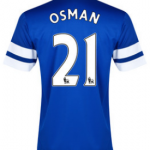 Leon Osman has said that the positive outlook brought to Everton by Roberto Martinez is infectious and that he is happy playing whenever he can under the new boss.

In our second player interview this week, NSNO caught up with Osman before he appeared at the “Make it Everton” event at Goodison Park, and he told us that he is proud to have played for England, is enjoying playing in the central role for Everton, and wants a new pair of socks for Christmas.

“I love playing football, I just love being out on the field, and being in the middle is probably where I’m most comfortable.  That role is perhaps a little bit different under the new manager than it had been previously but to be out on the field in any role for Everton is a great honour.

“When I’ve been away with England, Roy Hodgson has just said to go out and enjoy the games really, the same as any other manager.  He just tells me if and when I’m playing and to go out and do my best, which is all you can ask for from any manager.

“There’s so many good players out there that it took a while for me to break into the team and now I’ve got a couple of caps I can look back on that with pride.

“I think any player who’s been involved in the England set up over the last few years has probably got aspirations of going to the World Cup and could probably be in with a shout of being on the plane.”

When asked about his plans for Christmas, and what was top of his list to ask Santa for, Osman said that he had asked for new socks, adding, “I’m quite happy in most aspects, as long as my kids are happy, my family has a good Christmas and I get some new clean socks then I’ll be delighted!”

Positivity pleases Hibbert but no contract talk yet
Royle: Martinez needs no advice going into Anfield derby
To Top