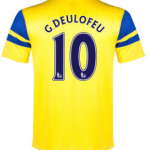 Everton manager Roberto Martinez has explained his theories on the use of the loan system, which some areas of the media have criticised this season.

Martinez has brought in Gerard Deulofeu, Gareth Barry, and Romelu Lukaku on loan this term and all three have benefitted the side incredibly – much to the dismay of many opposition fans.  But Martinez doesn’t see temporary signings as a problem, but more as an exciting proposition for the club.

“I think the modern game has changed the loyalty aspect of the game and having a player on a long term contract doesn’t guarantee you the security of the player,” said Martinez when questioned by fans about his utilisation of the loan system.

“Nowadays unfortunately, you can have a player on a five year contract and if he wants to go in the next window, he’ll let you know.

“I feel that doesn’t worry me at all, but there’s something about the loan deals that I like.  It brings a freshness about the player that has a point to prove.

“What’s always important to me is to have a really strong core that represent the football club, and we’ve got that.

“All the add-ons don’t worry me, I just want to have the strongest squad I can have from season to season.  If we lose the loans, then all I want from the players is great memories of them representing the club and for the club to move forward.  And then there’ll be other loans coming in.

“There are positions as loans and then positions as core in the dressing room.  When you’ve got Tim Howard, Phil Jagielka, Leighton Baines, Sylvain Distin, James McCarthy, Johm Stomes, Seamus Coleman, Ross Barkley, Leon Osman, Tony Hibbert, or Bryan Oviedo, they are the core that matters.  Then the add-ons come in and bring something different.

“Gerard Deulofeu is as talented a young man as you’re going to see in world football.  Does it matter if have him for one year, two years, five years, or ten years?  We want to have him, the question of ten years or one year isn’t there for us.  It’s one year, or nothing, and the answer’s very clear.  I’m excited about our recruitment department, and I’ve got no worries about replacing the loan players.

“If from the outside a jealous comment comes in about ‘oh they’ve got loan players who will go and then you’ve lost them’, no, it’s the other side, it’s more exciting.  If someone goes, then someone equally exciting is going to come in.”