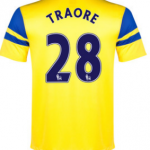 Everton boss Roberto Martinez says that new loan signing Lacina Traore could be involved in the FA Cup tie against Swansea on Sunday at Goodison Park.

The AS Monaco striker is yet to feature since signing on deadline day, but Martinez says that he is now ready for action.

“He’s getting there,” said the manager.

“He’s been working really really hard, and has benefited from these extra days off.

“He’s been really sharp in training and surprised everyone in the medical department with how quickly he’s got his fitness levels ready for the competition.

“We need to make sure there’s no risk for him but clearly Sunday is a good opportunity for him to be involved in one way or another.”