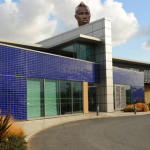 When asked by fan media whether he would like Lacina Traore to stay for another season, Roberto Martinez was very definite in his response and said that not only is he impressed but he may feature against Hull on Sunday. Martinez stated that:

“He is unique in what he brings, when you see a tall guy like him you don’t expect him to be co-ordinated enough. I have been very impressed with Lacina. It’s a shame that a hamstring problem that is a concern that we need to be aware, but as a footballer of that size and pace he would be a perfect player for us to keep for longer. Lacina loves the club already. When you start a game and score it’s such a good introduction. The warm up at Chelsea is such a disappointment. Samuel Eto and Willian were really concerned about what he would bring and that’s a great sign. Then he got the injury. He has got the potential to be really important to us and the next few days will decide his future.”

Vellios says his goodbyes
Martinez: This team has not reached it’s potential
To Top