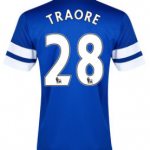 Tottenham Hotspur are apparently in talks with AS Monaco about taking Lacina Traore on loan to White Hart Lane next season.

The giant striker arrived at Goodison Park in January on loan with great fanfare, only to be injured before his second appearance in a Blue shirt and he was forced to sit out the rest of the season looking back on his perfect scoring record.

Traore had netted just six minutes into his debut – in the FA Cup against Swansea – but had then lumbered about the pitch not really doing anything else other than looking much bigger than everyone else.

But Roberto Martinez sees him in training every day and told the group of fans who met with him earlier this month that he is a tremendous talent.

Both Hull and Stoke have also enquired about taking Traore on loan but baulked at the £2m loan fee.

Martinez: I would like Traore to stay
Martinez confirms striker talks
To Top