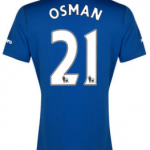 Today, Leon Osman  was kind enough to invite a group of independent Everton websites to Everton’s training facilities at Finch Farm, to interview him about his upcoming testimonial.

Finch Farm, bathed in glorious sunshine, was the location for a very informal interview with the midfield maestro, Osman who was at Finch Farm training, as the whole of the team were, took time out of his busy schedule to attend an interview conducted by independent Everton websites.Due to his training schedule we awaited his arrival in the foyer of the training complex, after a little while Leon came out and as it was such a glorious day we were  ushered outside to do the interview.

Outside we all gathered around a very relaxed Osman to start the interview, I began the interview with a question regarding his past and the length of time it took him to make it to the first team, after he took the mickey out of the amount of paper I had for questions everything flowed as naturally as it would imagine, Leon is very grounded and he appreciates his status as a footballer, he has worked extremely hard to get to his position and he deserves this acknowledgement.

We then went on to discuss the merit of selfies, the antics that went on at Bellefield, the players he has enjoyed playing with throughout his time as an Everton player and if there was going to be any special guests at his testimonial.

I personally, would like to thank Leon for his time today and although it was brief it was very enjoyable.

You can hear the full audio from the interview here .

Leon Osmans testimonial against FC Porto, will take place at Goodison park on Sunday 3rd August 2014 and the kick off time will be 4pm(1600).

Tickets will be available to purchase for the Park End, Main Stand,Upper Bullens and the Gwladys Street Stands and they will go on general sale from 8am(0800)on Monday 14th July.

Ticket prices are as follows

Supporters are advised to purchase tickets in advance to avoid unnecessary delays on the day of the game.

Tickets can be purchased from all of the usual outlets, and all of the above information can be found online at http://www.evertonfc.com/news/archive/2014/06/27/blues-to-host-fc-porto

No Nonsense Evertonian that doesn't do all the stats stuff, gives a view of your average bloke in the boozer, can be found normally crying and swearing about Everton.

Latest posts by Bally (see all)