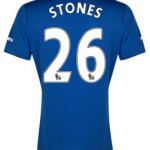 Spurs are rumoured to be putting together another approach for Everton star defender John Stones in today’s papers.

The young England international has won plaudits everywhere since he burst onto the scene with Everton and it was inevitable that stories would appear.

Apparently Arsenal and Chelsea want Stones too, but Spurs are preparing to beat them to the punch and be the first side rejected this summer.

Stones is a big part of Roberto Martinez’s plans, and after moving clubs especially to work with his former transfer target, would be loathed to sell him.