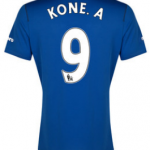 Everton manager Roberto Martinez says that whether or not he brings in another striker during the summer transfer window depends on how fit Arouna Kone is at the end of this month.

Martinez said that he has no doubts about Kone’s footballing ability and the fact that he will score goals at Everton, but that if he is not fully fit then he may be forced to bring in a striker to see the Blues through until Kone has reached full fitness.

“A lot will come down to how Arouna Kone adapts to being fully fit. It is a big area that we’re going to keep an eye on,” Martinez said. “I want to make sure that Arouna Kone is in a position where we can make a good decision to take us from now until January.

“I think it’s important that the players we have at the club get an opportunity to show what they can do. I don’t want to bring in players just for the sake of it because a position looks a little bit light. I want to make sure that we know all the information as to where the players are.

“At the moment, with Arouna, it’s difficult to say when he’s going to be fully fit. I’ve got an incredible confidence and belief in Arouna’s ability as a footballer, and if he’s fully fit very soon, I think we’ll be very strong in that position.

“At the moment, the squad is very well balanced. I do feel that the important players we had last season all came back, and that’s a really good starting point.”