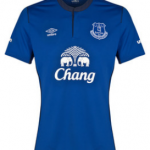 Hopes that Everton could complete a move for Anderlecht starlet David Henen today seem to be fading as it appears he could move to Greek side Olympiakos instead!

Henen has been on Merseyside for what feels like an eternity and has been training with Everton with Roberto Martinez stating that he would join Everton’s Under 21 squad should he sign.

Now, though, respected Belgian journalist Sven Claes has said that Anderlecht have confirmed that the young forward will instead move to Olympiakos.

It would be a bizarre turn of events should it be true, although there have been issues with the fee Anderlecht were asking from day one.