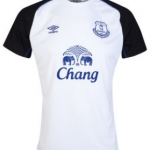 Everton will sign young forward David Henen on a permanent basis if he impresses enough during his loan spell from Olympiacos.

The Blues looked all set to sign the former Anderlecht teenager during the summer transfer window, but instead he was signed by the Greek side and immediately loaned back to Everton.

Now, it has emerged that if he impresses enough at Goodison Park this season, he will be signed for £500,000 and remain an Everton player.

There had been issues with the fee that Anderlecht were prepared to let Henen come to Everton for, which is why he signed for Olympiacos, where he will return if he fails to make the grade at Everton.