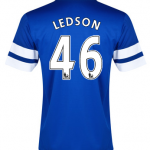 Ryan Ledson has stated that James McCarthy is the type of player that he aspires to be.

The 17 year old has been in and around the first team squad in recent months, most notably making the bench in the matches to Manchester City and Southampton towards the back end of last season, as well as being part of the Europa League squad that travelled to FC Krasnodar last month.

Speaking to Everton’s official website, Ledson revealed his admiration for both McCarthy and manager Roberto Martinez, as well as Under-21s coach David Unsworth, whose own personality was infectious amongst Ledson and his Under-21 team mates.

“We train sometimes with the first team but we always see the lads around the building and they are all good lads,” said Ledson. “I probably look towards James McCarthy [most] – he’s the same position as me, the same type of player. He’s brilliant. Last season he was probably one of our best players.

“The gaffer likes bringing young players through. He did it at Wigan and he’s doing it at Everton. It gives all the lads in the Under-21s a massive boost.

“I’ve seen a few things on television about him (Unsworth). He was a good player, very tough and very strong – and I think that’s what he’s trying to instil in us.

“He’s always in the gym and keeps as fit as anything, and I think that sets an example for us, makes us work hard.

“He’s a great coach. We look forward to coming into training. He’s always dead bubbly and lively and he has us playing really well at the moment.”