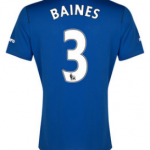 Everton boss Roberto Martinez has said that, for him, Leighton Baines is the number one penalty taker at the club, despite allowing Kevin Mirallas to take the penalty against West Brom this evening.

Martinez was speaking to the Sky cameras after tonight’s 0-0 draw in which Mirallas took responsibility from the spot but saw his penalty go wide as the Blues made it 8 games without a win.

“But in the same way, we had a penalty shoot out against West Ham and as you saw Kevin Mirallas always takes the penalties really well and he was really confident.

“At that point you need to feel confident and he was feeling that he could take the penalty and Leighton Baines was happy to allow him to do that.

“For me Leighton Baines is the number one penalty taker and at that point I would have been quite happy just to allow Leighton and Kevin just to discuss that.

“There are a few penalty takers in the squad who could have stepped up and taken the penalty but the biggest disappointment is that we couldn’t score the penalty.”

Mirallas was substituted at half time, just moments after he had missed the penalty, but Martinez says that has nothing to do with the penalty or with the rumours that Mirallas and Steven Naismith had a bust up in the tunnel.

“He wasn’t 100% and he was feeling his hamstring,” said Martinez.

“As you could see straight after the penalty he wasn’t moving freely and we needed dynamic players in the second half who were full of energy.”