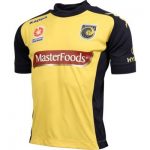 Everton have announced a partnership with Australian A-League side Central Coast Mariners which is being set up to benefit young players from both clubs.

The Blues hope to utilise the side, who finished third in their league last season, to give Under 21 age group players the chance of first team football, while also having the chance to give trials to promising players from the country which gave us Tim Cahill.

Everton’s Development Co-ordinator – Joe Royle – who is responsible for the final stage of progression from youth teams to first team, says it continues a long line of connections between Everton and Australia.

“We have a long association with Australian players here at Everton – as far back as the 1960s I played with Dennis Yaager in the youth team – and all Evertonians will remember the contribution Tim Cahill made to the Club. So we believe this is something with the potential to benefit the Club,” Royle said.