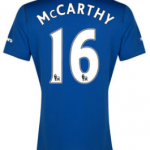 James McCarthy will be part of the Everton squad that faces Liverpool in the Merseyside derby this weekend, according to Roberto Martinez.

The Republic of Ireland international was rumoured to have suffered from a setback of the hamstring injury that has restricted the 24 year old to just two appearances since the end of November, but Martinez was quick to refute that speculation at his pre-match press conference this morning.

“He [McCarthy] was in hospital yesterday having a scan to make sure he is fully recovered. The scans have shown that he is perfectly healed and now it is about adapting him to the match intensity.

“I expect James to be in the squad for the weekend so it is terrific news in that respect.”

The Spaniard also gave an update on Tim Howard, who has been sidelined since the Boxing Day defeat to Stoke City with a calf injury.

“Tim is training now and it will be important to make the right decision. He feels strong and he feels ready. The medical advice is to give him another week just to make sure he is fully healed and we don’t take any risks,” the Catalan added.

“With any soft tissue problem you need to be a little bit wary but it’s incredible how quickly he has recovered and how well he is doing in training.

“We are going to assess him over the next two or three days but the medical advice is to give him another seven days before he is on a football pitch, so we will keep that in mind.”