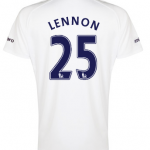 Tottenham Hotspur have reportedly told Everton that Aaron Lennon will cost them £6m if the Blues are to make the winger’s loan move permanent.

The 27 year old joined the Toffees on deadline day in January after finding himself frozen out at Mauricio Pochettino’s side, and built upon his Man of the Match performance over Newcastle United by scoring his first – and the winning – goal against Queens Park Rangers last weekend.

Roberto Martinez has the option of purchasing the former England international at the season’s end and, having been left impressed by Lennon’s ability both on and off the ball, as well as potentially being left short of wingers come the summer, the Spaniard may well be swayed into bringing Lennon to Goodison Park permanently.

With Lennon himself having gone on record over how much he is enjoying his stint on Merseyside, it is looking ever more likely that a deal could be struck between the two clubs during the summer months, providing the wideman’s wages are not too steep.

Lennon has made seven appearances so far for Martinez’s side, scoring one goal.