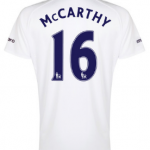 Last weekend’s victory over Southampton was the Toffees’ third win on the spin, and lifted the Blues to 11th in the Barclays Premier League table. With 7 matches of the current campaign left to play, McCarthy is of the opinion that Everton can finish the season on a high – starting with a victory over the Swans on Saturday.

“There’s been a big improvement, obviously,” he told evertonv. “I think the main thing is now that we go on a winning run and so far, so good.

“But we won’t get carried away, we’ll take it a game at a time and next up is Swansea, who could be pushing for the European places.

“There’s never going to be an easy game in the Premier League and they are a good side, but we go there confident.

“We know we’ve got a good enough squad in this environemnt and we know we need to kick on now.”