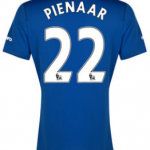 Steven Pienaar is ‘very doubtful’ for the visit of Manchester United this weekend, says Roberto Martinez.

The South African suffered muscle fatigue after playing an hour of the away match at Swansea City two weeks earlier, after initially being out of action for four months with a knee injury, and Martinez stated that it was touch and go over the 33 year old’s fitness and availability.

The Spaniard did confirm that Leon Osman and James McCarthy were expected to be fit for the Goodison Park encounter with Louis Van Gaal’s Red Devils, however.

Martinez said: “Stevie [Pienaar] is not going to be fit for today [Friday] so we are going to assess him tomorrow but it is very doubtful he will be available for the squad at the weekend.

“Since last weekend, Leon Osman has progressed well over these two sessions so I am looking forward to seeing if he can get through the next two days’ work in order to be in the squad for Sunday.

“James McCarthy has also progressed well and I expect him to train today [Friday].”