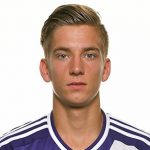 Everton are said to be weighing up a move for Anderlecht midfielder Dennis Praet, according to the Guardian.

Praet, a product of Anderlecht’s youth system, is rumoured to be allowed to leave by the Belgian outfit this summer, with a £10m price tag the asking price set by Belgian Pro League club.

An attacking midfielder by trade, 21 year old Praet has amassed over 132 appearances since making his full debut in September 2011 against Lommel United – a match he provided two assists in – and would be in keeping with Toffees boss Roberto Martinez’s plans to build a young, vibrant, attacking force on Merseyside.

However, with Aston Villa and Southampton both chasing Praet, and with a need to reinforce other first team squad positons such as centre back and striker, would an outlat of £10m on another midfielder be in the Blues’ best interests? Let us know in the comments or on our forum.