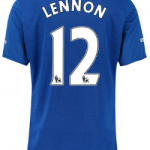 Aaron Lennon has reaffirmed that Everton was the only option he considered as he left Tottenham Hotspur in the summer.

The 28 year old was a deadline day signing for the Toffees ten days ago after the Blues finally secured his services on a three year deal and, after publically revealing that he only wanted to move to Merseyside following a successful loan spell in the second half of the 2014/15 campaign, Lennon stated once again that he was only committed to playing under manager Roberto Martinez at Goodison Park.

“There were other clubs interested but to be honest I didn’t really even entertain it,” he said.

“Everton was the one for me, it was the one I was waiting for regardless of anything else.

“Honestly, I just sat their hoping this deal would go through, and thankfully it did.

“From the loan spell you have a feeling of what you want and I was willing to wait until the very last day, the very last hour for this one to happen.”