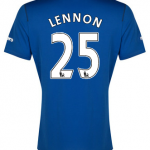 New signing Aaron Lennon has revealed that he did not want to move to any other football club other than Everton.

The 28 year old signed for the Toffees permanently on transfer deadline day, penning a three year deal with the club that he spent the second half of the 2014/15 campaign on loan at.

And, after finally securing the move that he had dreamed of all summer, the winger stated that he didn’t envisage himself playing anywhere else except Goodison Park thanks to the warmth and generosity of everyone associated with the Merseyside outfit.

“Everything” was Lennon’s response as to what made him choose Everton and no one else.

“The gaffer, the lads, the staff, the fans, everyone to do with the club, to be honest, made me feel so welcome from the first that I got here,” he continued.

“You have that feeling and it was just so comfortable. I knew from very early on that this was the place for me and I was so happy for the deal to get done.

“It’s an unbelievable feeling, a lot of people know it’s the move I wanted and from the first time I got here, it felt like home.

“I was just hoping it got done throughout the summer, I was just waiting, waiting. Yesterday was a great moment for me to finally become a full time Everton player.

“The loan spell was great for me. I enjoyed the whole feel of everything and the reception from everyone to do with the club. I felt so welcomed and I was just hoping throughout the whole summer that this one got done – and thankfully it did.”

Lennon will wear the number 12 shirt for Everton, after Ramiro Funes Mori took the number 25 jersey that Lennon wore during his loan spell last season.