Unfortunately for the fans, Everton don’t have funds to be regarded as one of the top 4/5/6 (adjust to where Liverpool end up finishing) clubs in the Premier League and are situated some distance outside of London. These two factors mean that any opinions we hear from TV Pundits, Podcasts and other football fans tend to be the same tired clichéd nonsense we’ve all heard a millions times before. ‘The Friendly Derby’ is around the corner, so after listening to the Guardian’s Football Weekly podcast recently and their extensive 1 minute preview of the game, it seems as good a time as any to debunk some myths. 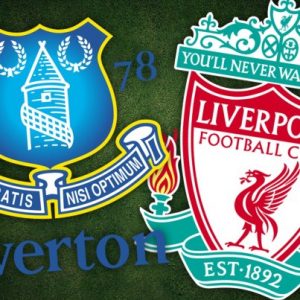 Seeing as it’s already been mentioned, let’s start with the term that is trotted out every single Merseyside Derby and depicts that Everton and Liverpool fans absolutely love each other; much to the annoyance of both sides. We’re not a rivalry based on religion, class or geography and there’ll always be a togetherness as far as Hillsborough goes (a tragedy for the entire city) but to say that relations between supporters is friendly is wide of the mark.

Although there used to be many fans from both sides who would sit next to each other during the game, you’ll find few opposition fans in the home ends nowadays and they’ll certainly not be sitting in The Kop or The Gwladys Street. We don’t spend the whole day of the match together wishing each other the best of luck and batting friendly banter back and forth whilst we link arms and skip down to the stadium; Everton fans generally hate the deluded, flag waving, day tripping, full-kit wearing c**kwombles and I’m sure a Liverpool fan would have strong words to say about Everton fans too, but we don’t really care what the red side say.

I can’t say that I lose sleep over this one but it’d be nice to set the record straight. Everton bought Romelu Lukaku for £24m (potentially rising to £28m) but they also sold Marouane Fellaini for £28m to Manchester United in the previous summer. “But James McCarthy cost £13m” which was helped funded with the sales of Victor Anichebe (£4m) and Nikicia Jelavic (£6.5m) in the same summer. So, with the exception of Funes Mori who seems to get more expensive by the day, Martinez hasn’t been backed much more than his predecessor in the transfer market, especially considering the wages freed up when Heitinga, Neville and Fellaini departed the club as Martinez arrived.

3. “Ross Barkley will be a Manchester United player next summer”

This isn’t so much about the player himself but rather the notion that Everton bend over as soon as a club comes in for one of their players. Obviously, the John Stones saga has debunked that myth on it’s own but even then we had to put up with a media crusade that he’d eventually leave, right up until deadline day. Over the past decade or so, there’s only three players that Everton have reluctantly sold. Two of those sales (Rooney & Arteta) were because the club were financially unstable and needed a quick source of income and the other was Joleon Lescott’s sale to Manchester City, a transfer saga that got very bitter, very quickly.

I’m sure people will point to Marouane Fellaini and Jack Rodwell but Everton were happy to see those players go. Everton fans couldn’t believe their luck when the news broke out that Manchester City had made a substantial bid for Rodwell, such was his form over the previous season whilst Martinez had Gareth Barry and James McCarthy waiting around the corner on deadline day for when Manchester United would get desperate and overpay for Fellaini. Baines, Coleman, Stones, McCarthy and Barkley are all players who the have been kept at the club despite being the subject of bids in the recent past.

4. “Everton fans should be happy, they’re punching above their weight”

This was definitely more prevalent during the Moyes era as Martinez is a lot more vocal about his ambition for the club but it’s definitely still an ongoing misconception. Everton fans don’t need reminding but the Toffees were one of the best football teams in Europe during a period in the 1980s and a lot of the fanbase grew up during that era. Prior to the riches of Manchester City and Chelsea, Everton were most likely the fourth biggest club in the land, yet we’re supposed to be content with top 7/8 finishes because of the horror show that was the 1990s?

It’s been 20 years since Everton last won a trophy and the Premier League ever-presents can never be accused of punching above their weight whilst that worrying statistic continues to grow.

5. Just about anything that England fans say about Phil Jagielka & Leighton Baines

You know what it’s like, you’re watching England be held to a goalless draw by some Eastern European side and you decide to have a look at what Twitter thinks of the performance and you see these numpties…

That's why Phil Jagielka should never play for England. Too slow.

Jagielka is far too slow. Tries hard but not good enough

I like Shaw… Such a massive improvement on Baines

At the beginning of last season, an EA Sports study recorded that Jagielka produced the fastest sprint of any Premier League footballer in the month of August. Now, I’m not saying Jagielka is the fastest player in the league but it’s abundantly clear he is far from slow. An Everton fan can probably count on one hand the amount of times an attacker has outpaced him.

Personally, I believe Leighton Baines to be Everton’s best player of the premier league era. He’s the best passer in the current Everton squad and during his ‘poor’ form last season, he produced 2 goals and 9 assists in 31 appearances in the league. To put that in perspective, Luke Shaw has 0 goals and 2 assists in his entire career.

Are there any other Everton misconceptions that bother you?

Been on here for over a decade now and I still don't know why.