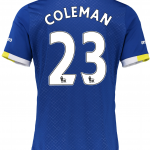 Everton’s Seamus Coleman believes it will take time for the players to shake off the last regime’s tactics in favour of new manager Ronald Koeman’s.

The Blues’ tactics were largely built off a possession-based game under former boss Roberto Martinez, with short passing a feature of the Spaniard’s ill-fated time in charge.

Koeman, meanwhile, has favoured a more direct approach since taking over, with raking balls and pressing just two examples of the difference between the Dutchman and his predecessor.

Coleman played under Koeman for the first time in the 3-0 friendly victory over Barnsley at the weekend.

And the 28-year-old, who returned to Goodison after his Euro 2016 excursions with the Republic of Ireland a week ago, says it may be a while until the players are fully accustomed with Koeman’s directives.

He told the Liverpool Echo: “Every manager is different and I wouldn’t say there’s any right or wrong but when you play in a regime for a certain amount of time you will pick up habits that stick for a little while.

“I’m sure this manager now will be wanting to get his good habits into us and we’ll have to forget some of the others that we had.

“That’s part and parcel of changing managers, but then of course it’s different when you go away in international duty so you’re used to change.

“I’ve only been back a week and I’m still coming to terms with what he (Koeman) wants and what he doesn’t want but you can definitely see just from the (Barnsley) game that he’s not afraid to mix it up.

“We were a bit direct at times and a few of the channel balls got Geri (Deulofeu) in during the first half. It’s about keeping possession and then being direct when we have to be direct.”