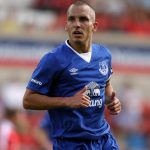 Leon Osman believes that Everton were right to sack previous manager Roberto Martinez – but said that morale wasn’t as bad as people thought during his tenure.

Osman’s 19-year association with the Blues came to an end last week when new boss Ronald Koeman opted not to hand him a new contract.

The 35-year-old midfielder has been on the lookout for a new club since then, with speculation linking him to Wigan Athletic.

However, Osman took time out of his search to appear as a guest on BBC Radio Merseyside on Tuesday evening.

And, in quotes transcribed by the Liverpool Echo, the former Toffees player said the club was right to end Martinez’s three-year reign at Goodison Park.

He said: “(Under Roberto) it was pleasant, it was good. There was always a good atmosphere, and we always enjoyed coming training.

“That first season was fantastic, when the feeling was good and we were winning games, but we lost our way a bit in the next two seasons.

“It was disappointing, and the way things developed was probably right. We needed to look for a new manager and that’s what we did.”

Martinez originally joined Everton from Wigan in the summer of 2013, and guided the Blues to their best ever Premier League points tally during his first campaign in charge.

European football was brought back to Goodison as a result, and Martinez also guided his side to two cup semi-finals during his time in L4.

However, back-to-back bottom half finishes followed over the next two seasons, as well as rumours of the Spaniard falling out with a number of his first-team stars.

A horrendous run of form, coupled with his unwavering positivity, was enough for Evertonians to turn on the 42-year-old.

Martinez was eventually relieved of his duties in mid-May after a 3-0 drubbing at the hands of relegation-threatened Sunderland.