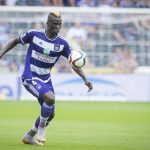 Everton have set their sights on signing Anderlecht defender Kara Mobdji, according to the Daily Mail.

Mbodji, 26, is rumoured to be available for a fee worth around £6.2m if he leaves the Belgian club before August 5.

And the Mail claims that the Toffees will make a move for the centre-half with such a bargain price on offer.

Blues boss Ronald Koeman is acutely aware of the need to bolster his defensive options heading into the 2016/17 campaign.

The Dutchman is bracing himself over the departure of John Stones to Manchester City, with the two clubs in the process of striking a deal for the 22-year-old.

Meanwhile, club captain Phil Jageilka has contended with a hamstring niggle throughout this summer’s pre-season schedule.

With Ramiro Funes Mori the only other senior centre back available to Koeman, the 53-year-old will be keen to draft new recruits as soon as possible.

The Senegal international made 41 appearances in all competitions as the 33-time league champions finished third in the league standings.

The supposed first name on Senegal head coach Aliou Cisse’s team sheet for his national side, Mbodji has been capped 22 times for his country of birth, scoring three goals in the process.