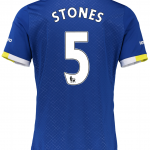 Everton and Manchester City have begun talks over the transfer of John Stones, according to BBC Sport.

The clubs have opened up a dialogue over the defender, who has made it known of his desire to leave.

Everton were ready to remain steadfast in keeping Stones at Goodison Park.

But, after he returned from international duty with England at Euro 2016, Stones told Blues boss Ronald Koeman that he wished to join Pep Guardiola’s revolution at Eastlands.

Manchester City believe they can acquire the services of the 22-year-old for a fee worth around £50m.

And the Premier League pair are said to not be far off in terms of Stones’ value, with any deal highly likely to hinge on how much Everton want for their young star.

Stones handed in a transfer request in the week before the 2015/16 summer window closed, but chairman Bill Kenwright declined his wishes to leave.

Stones originally joined the Toffees from Barnsley for £3m in January 2012.

The centre-half broke through into the first-team setup during David Moyes’ final season in charge in L4.

He established himself as an Everton regular and potential world-class performer during Roberto Martinez’s debut campaign at the helm in 2013/14.

However, Stones’ relationship with the Goodison faithful became strained in the final six months of Martinez’s tenure, with Evertonians becoming increasingly exasperated at his over-playing in defence.

Stones has made 95 appearances in all competitions since joining, scoring once in that time.