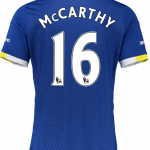 Ronald Koeman has revealed he has doubts over three of his midfielders ahead of Everton’s Premier League match against Stoke City.

James McCarthy, Tom Cleverley and Darron Gibson all reported minor knocks after the Toffees’ convincing 4-0 victory over Yeovil Town in their EFL Cup second round match.

Koeman, however, believes the trio will be fit enough to be in contention for the home encounter with the Potters, and reported an otherwise clean bill of health for his first-team squad.

Full back Seamus Coleman remains sidelined due to an ongoing ankle injury, while Muhamed Besic and Matthew Pennington continue to recover from their long term injuries.

Koeman said: “Seamus is doing well but not so well that he will be fit for weekend.

“We have some small doubts over James McCarthy, Darron Gibson and Tom Cleverley but I would expect them normally to be fit for the weekend.

“Apart from that it’s only really Seamus Coleman [missing].”