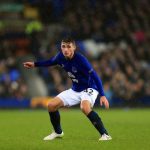 Everton midfielder Ryan Ledson has joined League One side Oxford United for an undisclosed fee.

The Us announced the signing on their official website on Thursday afternoon after Ledson signed a three-year deal with the club.

Ledson, 19, had been seen as one of the brightest starlets to come out of Everton’s youth academy in years.

However, the centre midfielder fell down the pecking order at Goodison Park and decided to leave for pastures new.

Oxford boss Michael Appleton expressed his delight at acquiring the services of the youngster.

“He is a very exciting signing. He plays with passion and energy, he can see a pass and he knits things together in the middle of the park.
“It is fantastic that he is happy to come here to Oxford looking to prove himself, get games and build a career away from Everton. I think that speaks volumes for the way the club is regarded and people know that we will nurture young players the right way and always look to help them.
“He has a very bright future ahead of him.”
Ledson made one first-team appearance for Everton – the midfield man making his senior bow in the 1-0 Europa League defeat to FC Krasnodar in December 2014.
The following two tabs change content below.