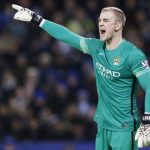 Koeman spoke to the assembled press at his pre-match press conference ahead of Saturday’s Premier League encounter against Stoke City.

Hart has been linked with a move to Everton after being told he has no future at the Etihad stadium.

But, when quizzed over the rumours surrounding an impending move for the goalkeeper to Goodison Park, Koeman was abrasive in his response.

He said: “There is no interest.”

And when pressed further on whether the Toffees were interested in Hart, Koeman simply replied “No.”

The England international was told by new boss Pep Guardiola that he was not part of the Spaniard’s plans heading into the new campaign.

City announced the signing of Barcelona shot stopper Claudio Bravo on Thursday in a deal worth £15.4m – a move that will push Hart further towards the exit door.

Everton will also continue to look for goalkeeping reinforcements ahead of the transfer deadline day.