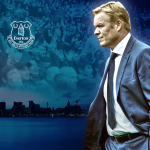 I don’t think I like Ronald Koeman. He’s not a nice man and he hasn’t expressed his overwhelming love for all things Everton. There have certainly been little in the way of People’s Club soundbites and you could argue the treatment of some of our players has been pretty diabolical. However, for all these reasons and more I am starting to believe Ronald Koeman might be the right man to take Everton Football Club forward.

Make no mistake Ronald Koeman isn’t going to be inviting former players and managers to Finch Farm for a photo opportunity anytime soon. This is a man who has little interest in Everton Football Club as an entity, what he is interested in is Everton the team. A winner in his time as a player he has marked out clearly a total intolerance for anything he deems as, “bullshit”. He is happy for others to do any job that takes him away from his task so no, he won’t be found at the negotiating table for transfers. rumour has it is he is happy to delegate day to day tasks to coaches. Koeman’s seemingly obsessive focus on success and creating his team is all that drives him and makes him very different from his predecessors. It certainly can’t be argued this is a man afraid of change with a variety of formations, substitutions and first elevens selected in attempt to yield results.

Results and performances on the pitch this season have been distinctly average but Koeman has been largely brutally honest in his assessment of a squad full of players he deems to be undeperforming (his criticism of Barkley has been regularly highlighted) or simply not good enough. In stark contrast to a Moyes, “We will go with what we’ve got” or a Martinez, “He is one of the most sensational you are going to see in Premier League history”, Koeman is quick to criticise. This is man who makes even single piece of praise a golden nugget players should hold onto.

Despite all of this though he seems to command players respect through a combination of who he is and how he acts. It’s hard not to take what he says seriously and literally as this is not a man for hyperbole. When he tells you that you have no future you can be damn sure he means it, Oumar ‘Nothing in his locker’ Niasse is testament to that. On the back of that Koeman seems to have decided quickly that a number of players time is up and is acting rapidly to both make it known to them and work with Steve Walsh to get rid. Players that have been deemed fringe for too long now have had their chances and are on there way out, Tom Cleverley being a prime example. The ruthlessness and complete lack of sentiment from Koeman is demonstrated in everything he does as he openly calls for transfer additions so he can achieve his ambition.

Ronald Koeman isn’t a nice man, but he might just be the right man. His success can be our success, and I for one am a little bit sick of being nice. Being The People’s Club is all well and good but Koeman is a man who seems to actually coach by our real motto. Nil Satis Nisi Optimum.