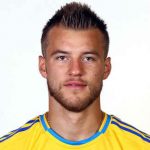 On again, off again the seemingly never ending Andriy Yarmolenko transfer saga has once again reared it’s head in an Everton transfer window. Various media have once again linked the midfielder with a move to Goodison Park with a fee of just 9 million pounds rumoured.

The Dynamo Kiev player has made no secret of his wish to perform on a bigger stage in the future. His adaptability across the midfield may be something that appeals to Ronald Koeman. A player coming into his prime would fit into what appears to be the short term plan to strengthen the squad. Add to this a low price and it is easy to see why Everton could finally pull the trigger on this deal.

While it remains to be seen if this is just not another in a long line of nearly done deals for the 27 year old, there is no doubting that the player has many of the qualities that Ronald Koeman admires. All signs point towards this being little more than speculation at this point with Tottenham also reumoured to be interested. However, do not be surprised if come deadline day if there are sightings of the Ukrainian in your local Lidl.