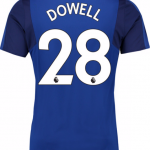 Young Everton midfielder Kieran Dowell says that having Wayne Rooney back at Everton has really helped him push on this summer.

Dowell has scored in both of Everton’s pre-season friendlies this summer so far, and says that having the influence of Rooney alongside him has been a big help.

He said, “He’s been quality. As a local lad as well, he’s really taken to us young local lads and really helped us.

“Even sitting next to me in the first half, he was giving me tips before I came on, so it’s really good to have someone like him in the squad.

“It was great playing with Wazza and Davy [Klaassen] in the second half, and with Cuco Martina overlapping down the right, I thought it worked really well.

“It’s a case of just getting more match fitness on Saturday and then the next game is around the corner next Thursday [versus Genk], so we’re looking forward to it.”