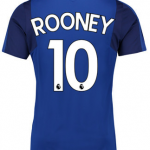 Everton striker Wayne Rooney says he is sure that Manchester United fans will have enjoyed seeing him score against City again despite playing in Everton colours this evening.

The England striker also gave a shot at his critics as he scored his 200th Premier League goal in the 1-1 draw with Manchester City at the Etihad.

“It was nice,” said an understated Rooney.

“To do it today in such an important game for us, with tough games coming up, it was a sweet moment and I am sure the red half of Manchester will have enjoyed it as well.

“We can certainly improve. It is early days obviously. We have made a lot of signings this summer. We are ambitious, we try to move forward. Time will tell, we aim to get better hopefully over the next year or two and hopefully that brings success.

“Everton have shown their ambition. We are trying to close that gap on the top teams.

“It is not bad for someone who is not fit anymore and can’t get about the pitch! I have always put a shift in for the team and tonight is no different.

“I am focusing on Everton. I am sure I will speak to England manager Gareth Southgate over the next few days and we will see what happens.”