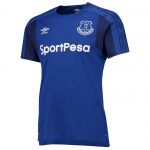 Record signing Sigurdsson needs game time and there is a question over his fitness following a summer of discussions with his former club over the move to Everton.

Everton boss Ronald Koeman, though, says that he will make a decision on Sunday over Sigurdsson’s involvement.

“We will do some tests to see about Gylfi’s physical state,” said Koeman

“He needs game time, but if it’s game time he needs – it will be with the first team.

“I don’t know if he’ll be involved on Monday, but we will make that decision on Sunday.”

Everton midfielder Andre Gomes says he is sad about the result but that he is delighted to be back on the pitch...

Gomes ready to bring the love again
To Top