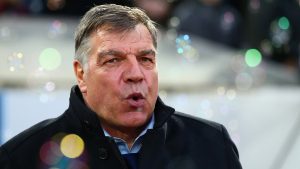 New Everton boss Sam Allardyce says it is the ambition of the club and not just the £6m a year he’ll be paid which twisted his arm to come out of retirement at the second time of asking.

Having clearly failed to make clear to Allardyce the ambition of the club when he was first asked to become Everton manager three weeks ago, Allardyce was suddenly reminded of it when he was asked again with a higher wage offer.

“Obviously, the club has gone through a difficult spell and hopefully I can put that behind us as quickly as possible and start looking upwards again.

“Ambition is important for any manager or coach, owner or director. It’s what you need to have and hopefully we can deliver to the fans to get this Club high up the league. That’s what we’re aiming for.

“The attraction of the club itself, the people I’ve known at the club – Peter Reid is one of my best mates, so are Andy Gray and Paul Bracewell whom I worked with at Sunderland – these people have always made me aware of just how special and unique a club Everton is and I feel really enthused and energised to come in as manager.

“I think that whatever’s happened before we’ve just got to all rally around together. Our will to do it all together would be my way forward.

“Because we are all in it together and let’s all pull in the same direction. Let’s try to get a healthy spirit around the club. That’s difficult when you’re losing but the win last night over West Ham and the magnificent atmosphere around Goodison, which was just brilliant, well that’s lifted everybody around the club.

“And we’ve got to try to keep our heads up and push ourselves until we make sure we get that better. The fans are the most important people at any football club, of course, and we have to give the players every possibility to play to their best, really give them no excuses for not playing to their best and get them right back up to the top level we believe they’re capable of.

“Last season showed what the club is trying to build and we need to demonstrate that level of ambition and assuredness again. We can. It’s a question now of putting in the work to do that and I’m really enthused by the prospect.”

A Look Ahead To Everton’s Next Fixtures
To Top