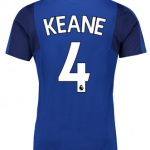 Everton have been linked with a move to sell defender Michael Keane after just six months at the club.

Rather than giving the England defender a chance to develop a partnership with a regular centre-half pairing, the Sunday People claim that Sam Allardyce is prepared to listen to offers for the former Burnley man.

Ignoring the fact that Everton have a Director of Football – which seems to be what most inside Goodison Park do when Steve Walsh wanders into a room, often by mistake – the paper reckons that Burnley are “monitoring the situation” but his former club are highly unlikely to give anywhere near a return on Everton’s outlay last summer.

Keane has struggled with his form after an initial good showing at Everton, but looked back to somewhere near his solid defensive self against Crystal Palace, despite being hamstrung by a starting partnership with the on-loan Mangala.