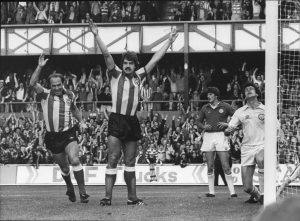 It’s a disturbing thought but Has Large Samuel with his clever 18 month contract together with the bottom twitching over relegation when he arrived, delivered his smartest ever move? Heres a tongue in cheek suggestion as to how he may stay put.

When Sam Allardyce took over at Everton, depending on who you spoke to, what you read or which social media outlet you used, the fans were split on whether it was a good appointment. It seems a long time ago now since the real worry of relegation forced many fans to admit, against their better judgement that there was very little choice. Not for the long term, just to get us out of the mess were had been slowly sinking into over the last four years. I, like many others took the view that now he’s here, we had very little choice than to get behind him otherwise it would be counter productive. The bottom twitching thought of relegation appeared to nudge Everton into accepting someone against all the clubs history and standards. Seen as a desperate move for the short term rather than future. Panic seems to have set in and arguments still rage whether Koeman was sacked too soon but things were really bleak back then.

At the moment, with Everton sitting comfortably in mid table with 40 points, you would be very hard pressed to find a blue who wants Sam to stay. One of the more common comments on Twitter and Facebook for example after the win against Stoke can be summed up as “Now we’ve got 40 points, Sam can go” (or more creative words to that effect). But will he leave or be sacked?

Why would he leave? He has another year left on his contract and the blues are just three points off 7th place which, if achieved would equal last seasons finish and should Spurs, Man Utd or Chelsea win the FA Cup, open up a Europa League place. With the opportunity  to maybe spend money he’s never had access to before in the summer why would he turn down the opportunity for a four pronged attack on silverware and the chance to be the first Everton manager for 24 years to win a trophy? If you are one for omens, it may be pushing the boundaries of credibility a bit but the old ’24 year rule’ may come into play here. You know the one, where Everton had been Champions every 24 years since first picking up the trophy in 1891. Of course 2011 ruined that run by finishing 7th just 26 points short of the target.

Next season though, will be 24 years since our last trophy…

Will he be sacked? He was brought in to save us from relegation and he’s done that with 7 games spare. I believe the only way he would possibly lose his job now would be if he lost all 7 games from now until the end of the season with maybe a heavy Derby defeat thrown in. Even with our horrific away form, I see that as unlikely (except maybe the derby defeat).

Imagine the scenario however if Sam manages to get us 7th, that Europa League poisoned chalice of a July start together with a Derby win. Then, next season, with more of his own players he improves ever so slightly into the top 6. What if he delivered a trophy? Would that be enough to convince fans to keep him longer? Would you trust the Everton board to sack someone who has just delivered? Once fans take a dislike to a manager it’s very difficult if not impossible to win them back. Would a trophy be sufficient pay off for functional boring football? The Everton board have got recent form for accepting the ‘ordinary’. Don’t forget, David Moyes hung around for many years because he delivered top 8 finishes pretty much every season and if Man Utd hadn’t called, he have still been at Goodison delivering 5th – 8th place finishes with the odd cup semi thrown in for good measure.

Imagine the fans warming to him because he managed to land that elusive League Cup. Imagine just for a moment, instead of calling him ‘fat Sam’, we call him ‘considerable Sam’ or ‘megalithic Sam’ as he leads us out in the Champions League. He may even come up with a strap line to take the place of ‘the peoples club’ such as ‘Everton – as good as 2 Sunday dinners, one after the other’.

Of course many successful clubs change managers often in the search for success with differing fortunes such as Chelsea and Spurs who unbelievably have both had over 20 managers since the Premier League began. I remember Southampton’s Nigel Adkins being sacked after he had brought the Saints up from League One which many felt was harsh. Would Everton remove a manager who would deliver top 8 finishes every year or in the new Moshiri era become more clinical and not accepting mediocrity?

The monster that is Sam Allardyce by very marginal improvement may just be about to confound everyone by hanging around longer than everyone thought.